Boutique hotels in Iran: a new book picks some of the best | CNN Travel

Julia Buckley, CNN • Published 7th June 2021
(CNN) — Cultural heritage, great food and... boutique hotels?
Some people travel to Iran for its history -- the 24 UNESCO World Heritage sites in the country, for starters. Others go for the living culture -- the great food and legendary day-to-day hospitality that regular travelers rave about.
Thomas Wegmann is a little different. For him, the most striking thing about Iran is its hotels.
Not grand seven-star hotels, either, but small, boutique properties run by families -- while being absolutely cutting edge.
"In Iran, there's a superb scene of boutique hotels combining contemporary design with characteristic Persian heritage -- and it's on the rise," he says.
The Swiss insurance professional was so wowed by the hotel scene on his first visit in 2019 that, despite having no publishing experience, he decided to write a book.
"On the flight back from Tehran to Zurich I was Googling whether there's a book about hotels in Iran, and realized there isn't a single one," he says.
"I was so surprised by the country, and especially by the hotels."
Now the result is out. "Persian Nights" showcases 16 of the best boutique hotels in the country, from cities such as Tehran and Shiraz, to a village on Qeshm island, in the south of the country.
It's the first English-language book to be dedicated to the country's hotel scene, giving those who don't know the country a glimpse of the thriving design scene beyond the historical sites.
"I think for every country you travel to you realize you have some ideas which are quite different from reality, and if the country is a bit more closed, and there are fewer people traveling there, sharing their photos and experiences, the more different it's likely to get. And I think Iran is quite a closed country so there's probably a bit more misconception than in other countries," he says.
His book -- on which he worked with an Iranian team, from photographer Hamed Farhangi to designers Paulette Ghahremanian and Mehrdad MZadeh -- profiles 16 of the best hotels in the country.
Although mostly refurbishments of heritage buildings, they're cutting edge, with concept stores, galleries and even vegetarian restaurants attached. Many of them are run by women, too. 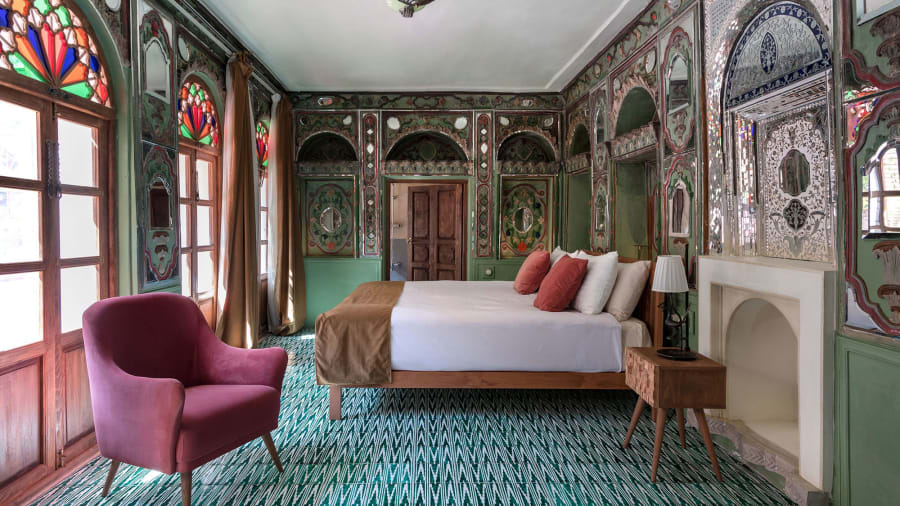 The "Mirror Room" of Darb-e Shazdeh has been painstakingly restored.

Joybar Boutique Hotel in Esfahan is a striking seven-room hotel owned by architect Tahereh Mokhtarpour and her partner, Manouchehr Peyvand Heydari, who run the prestigious Pishan Architects Studio in Tehran.

Reborn and reclaimed from a 19th-century building of the late Qajar Dynasty, it's now a slick, modern hotel, pairing details such as the original beamed ceilings and exposed brick domes with a sleek white-on-white palette, floating staircases and pared-back midcentury-style chairs.
It's a plastic-free property, with organic handmade soaps, vegetarian food and even hand-crafted straw slippers, made in the south of the country. 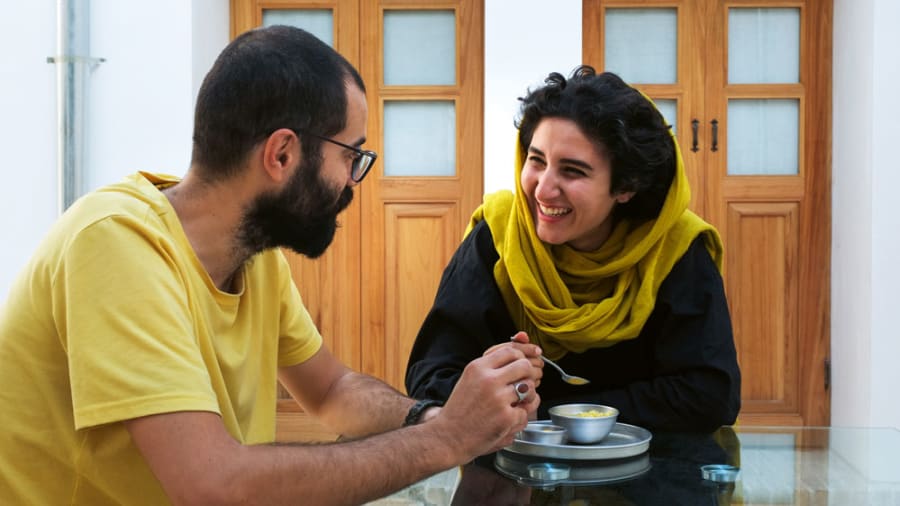 "There's such a strong heritage of old buildings -- why should they build new ones?" says Wegmann.

"This is a way of keeping them. I know owners who own others and are just waiting to renovate them."
Then there's the Hanna Boutique Hotel in Tehran. "It's a bit like a Bauhaus building from the 1930s, and they did a renovation that clearly separates between old and new," he says.
The inhouse concept store and restaurant pull in the locals, making it "a very interesting place to go -- I met lots of designers and architects," he says.
The seven-room Darb-e Shazdeh in Shiraz, run by Faranak Askari, is another highlight. The 19th-century trader's house has been brought back to life, with its painted walls and opulent mirrors given new life.
"She's just opened the only open-air cinema in Iran beside it, made with ship containers, and are doing a new restoration of a traditional house next door -- I really like her entrepreneurial spirit," he says.
As well as hotels, the book has a section on guesthouses. Howzak House is Esfahan's first ecolodge, near the UNESCO-listed Masjed-e Jame mosque. It's run by young couple Babak and Nassim and, Wegmann says, "it's like being part of their home."
They even run textile-printing workshops and have bikes for guests. "You can just ride around, it's very relaxed," he says. 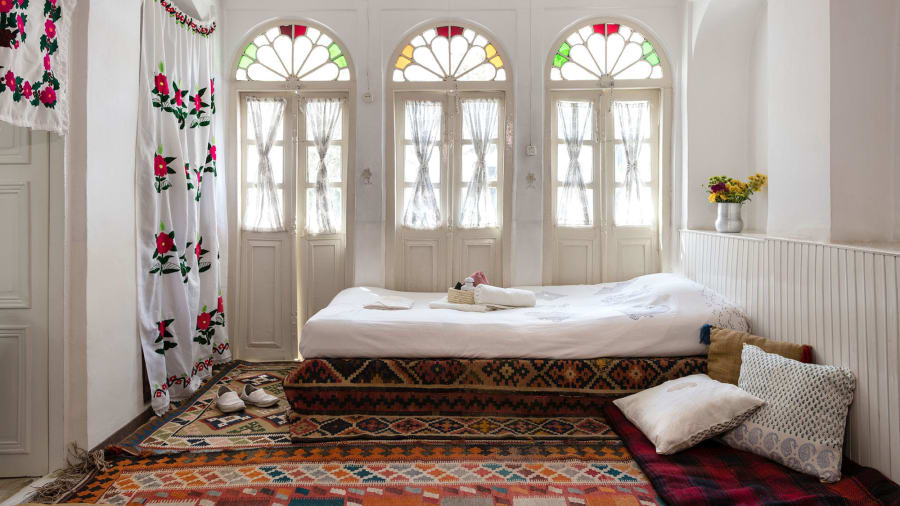 Howzak House is Esfanan's first eco-lodge.
The hotels aren't the only reason to go to Iran, though -- Wegmann says the country should be on everyone's must-visit lists.
"It was one of a few countries that I'd been really interested for a long time," he says.
"Iran, Japan, Peru -- I love countries with a very strong and ancient culture that has relevance in history. And I'd met a few Iranians in Europe, and they were always very friendly."
He made his first visit after separating from his wife. "It was my first trip afterwards, and I wanted to do something on my own," he says.
Wanting to be alone, instead of traveling with a group he hired a "driver guide," costing around $110 per day.
"It's fantastic because they guide you through the sites, and you can discover as much as you want -- it's very flexible," he says.
And although he would also be open to traveling in a small group, he'd avoid larger ones "because you can't stay in the kind of hotels I selected."
Booking the hotels for his trip was easy, he says -- because they all know each other.
"If you ask all 16 of those hotels if they can recommend another, it's always the same -- lots were recommendations (which are always the best), plus I did Instagram, internet research and read all the guidebooks to Iran," he says. 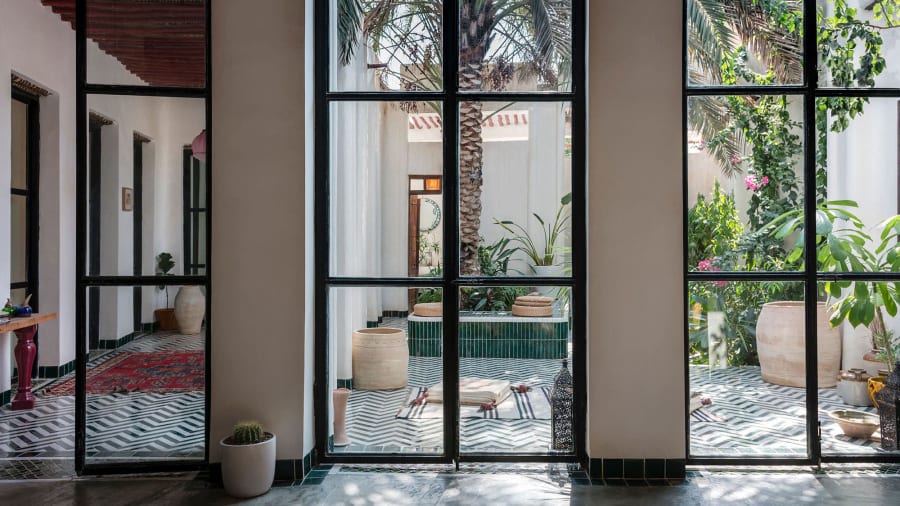 Laft 17 is on Qeshm Island, in the south of the country.

Between overnight stays and eating out at restaurants, he got to know eight hotels on his first nine-day trip; all but two of the others he visited on his second.

And in fact, as someone who'd researched Iran's history, its modern side came as a surprise.
"I expected a more traditional country but I was in espresso bars and concept stores in these hotels and it was like Europe or the States -- that came as a surprise to me," he says. "I didn't expect to see an Italian Marzocco coffee machine or a German Probat coffee roaster. And there's a strong creative industry.
"I discovered there are lots of realities, and I wanted to show what I experienced. It's what I saw and enjoyed."

Freedom as a tourist 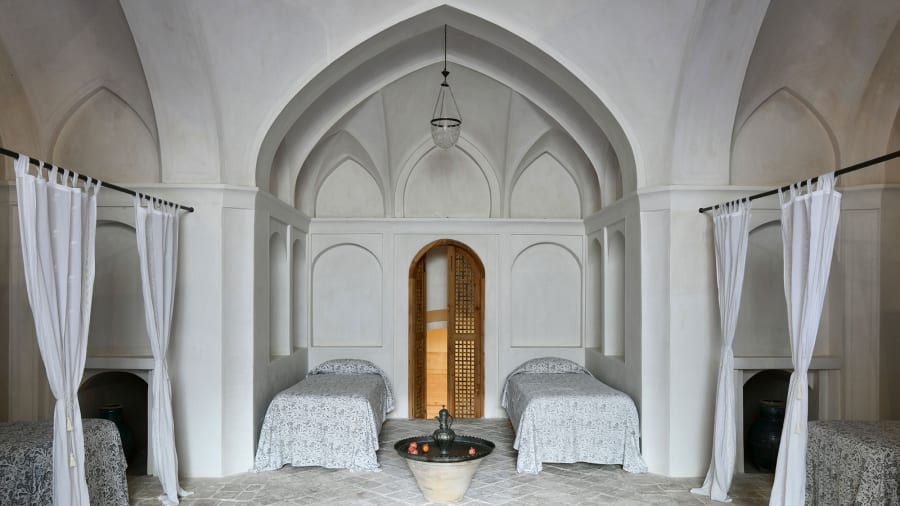 Manouchehri House is a renovated 19th-century mansion in Kashan.
Of course, not all the stories coming out of Iran recently are so rosy. Wegmann is at pains to point out that this is a book about hotels, not politics.
"For sure, it's not a free country -- it has very different realities, and different power. It's not Saudi Arabia, and it's not North Korea -- but it's also not the US or UK," he says.
But he wants the book to show another side to the headlines -- and to the travel guides, which focus on the history.
As a tourist, Wegmann says he felt "very free -- I felt like I could go everywhere, and was welcome everywhere at any time. I was going home late at night using Google Maps, and always felt safe."
He was welcomed into mosques to admire the architecture, and enjoyed Iranian cuisine -- "they have fantastic slow-cooked stews, and a lot of vegetarian dishes -- it's a very very rich culture in terms of eating," he says.
And then there were the people.
"I lived a year in Brazil so I'm very used to friendly and open cultures, but I think Iranians are especially friendly," he says, adding that there was never any pressure on him as a tourist, either.
Most of the other guests in the hotels when he stayed were Europeans and Japanese, as well as locals.
The pandemic nearly put paid to the book -- the publisher went bankrupt, before being bought by another company -- and it's certainly nixed a return trip for now. Iran has so far confirmed nearly three million cases of Covid-19, with over 80,000 deaths and just 0.49% of the population vaccinated, according to Johns Hopkins University.
But when things are looking brighter, Wegmann plans to return.
The first thing he'll do? Throw a party for the book launch.
نظرات  (۰)
ارسال نظر آزاد است، اما اگر قبلا در بیان ثبت نام کرده اید می توانید ابتدا وارد شوید.