Dome of Soltaniyeh in Zanjan

ZANJAN, Mar. 30 2016 (MNA) – The Dome of Soltaniyeh in Soltaniyeh city, Zanjan Province, was erected from 1302 to 1312 AD, has the oldest double-shell dome in Iran, and is considered one of the largest brick domes in the world. The structure has been inscribed in UNESCO World Heritage List.

Interior design of Dome of Soltaniyeh

SOLTANIYEH, Dec. 27 2018 (MNA) – The Dome of Soltaniyeh is the biggest brick dome in the world and the Mausoleum of Ilkhan Oljaytu, located 30 km east of Zanjan inside the rampart of the old city of Soltaniyeh. The structure is a very exquisite mosque which is well-known in the world from the viewpoint of architecture, interior design and space. 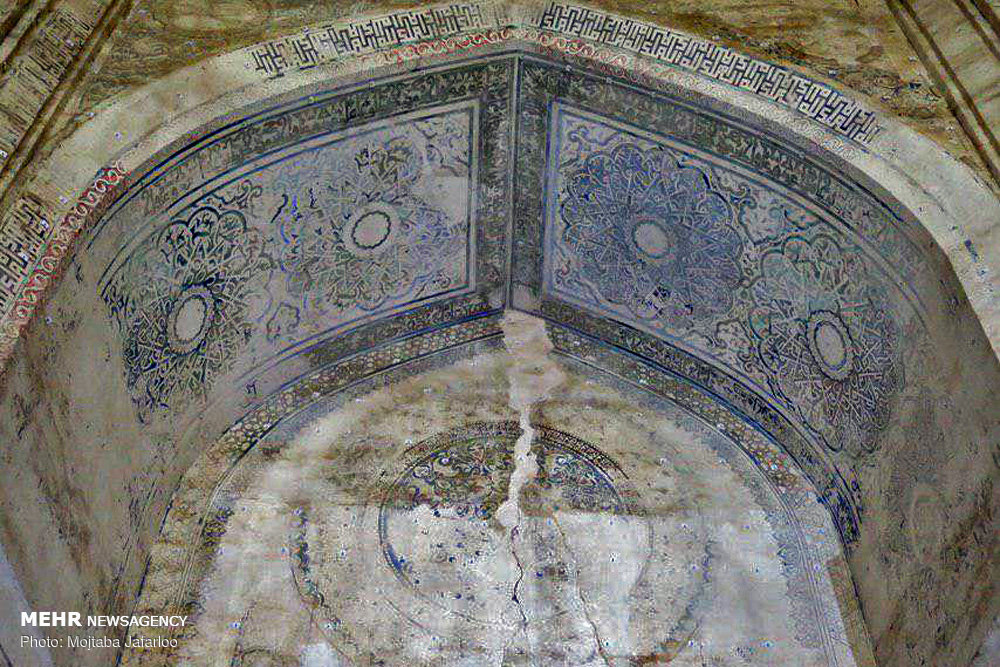 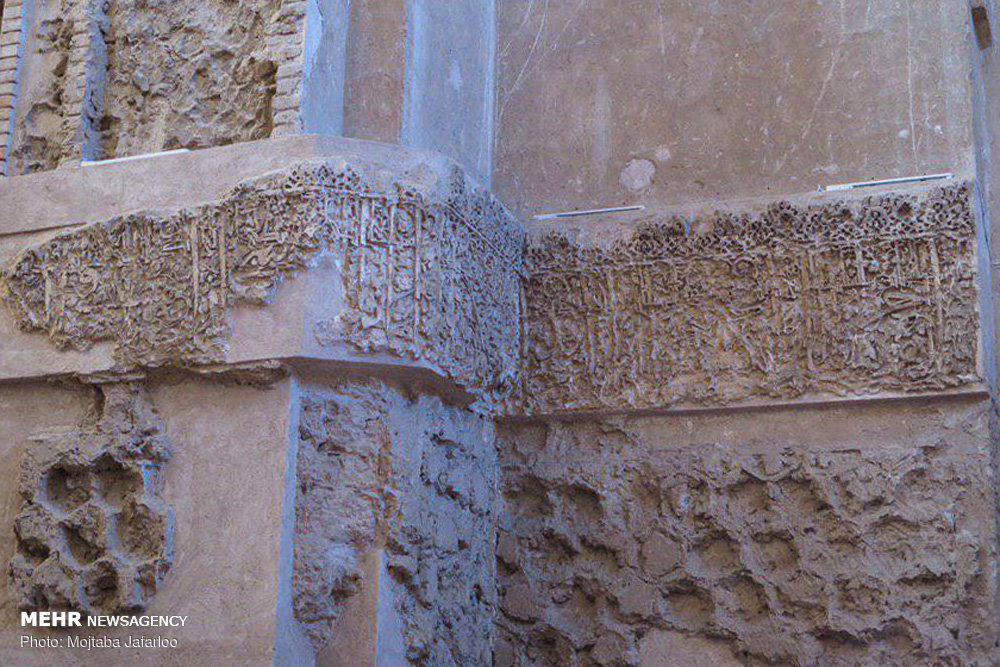 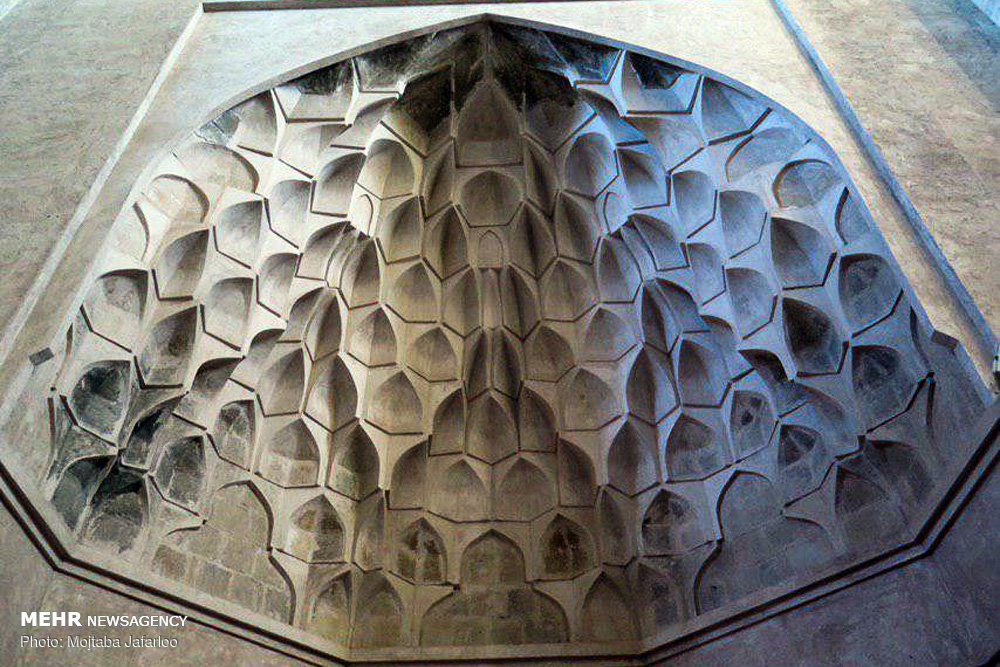 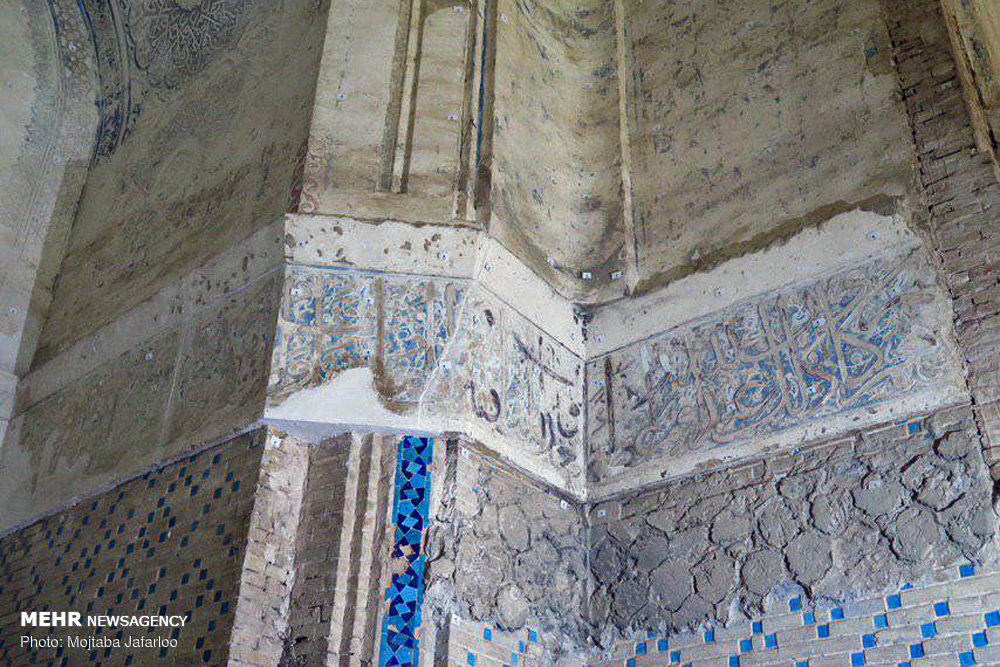 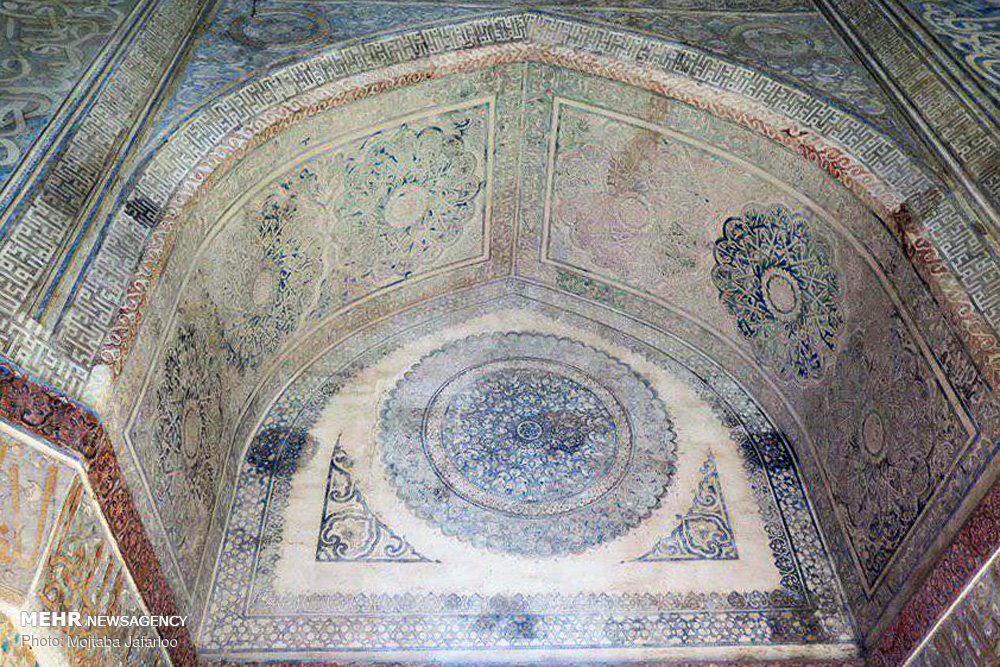 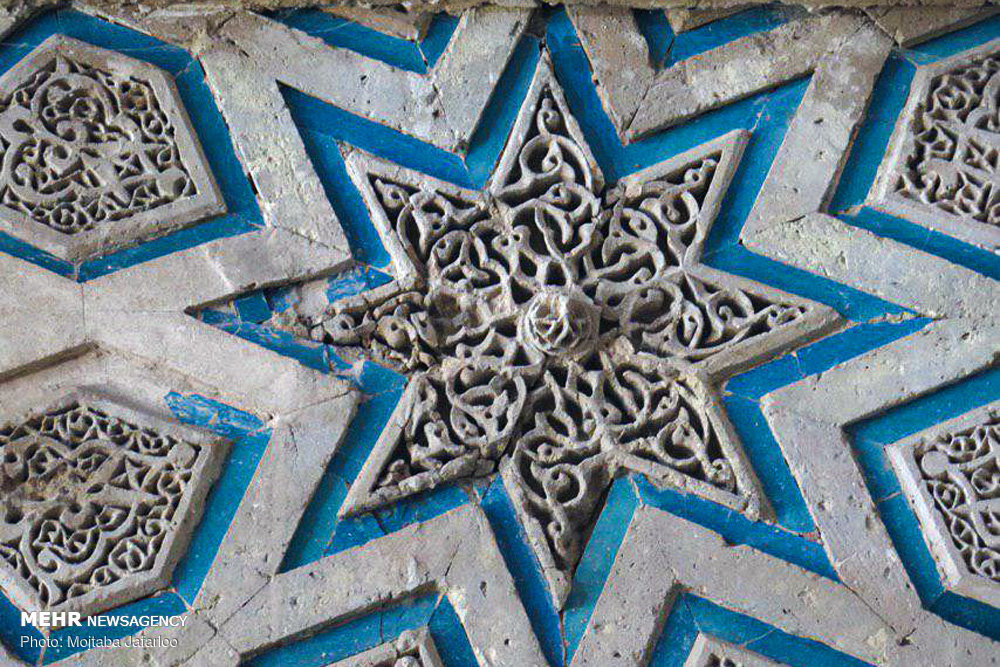 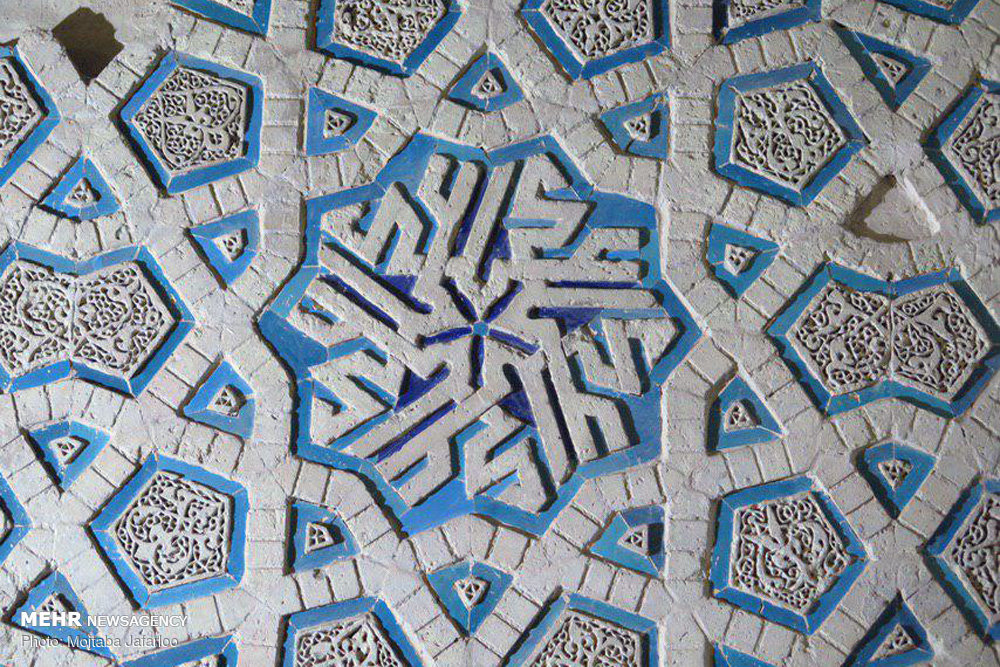 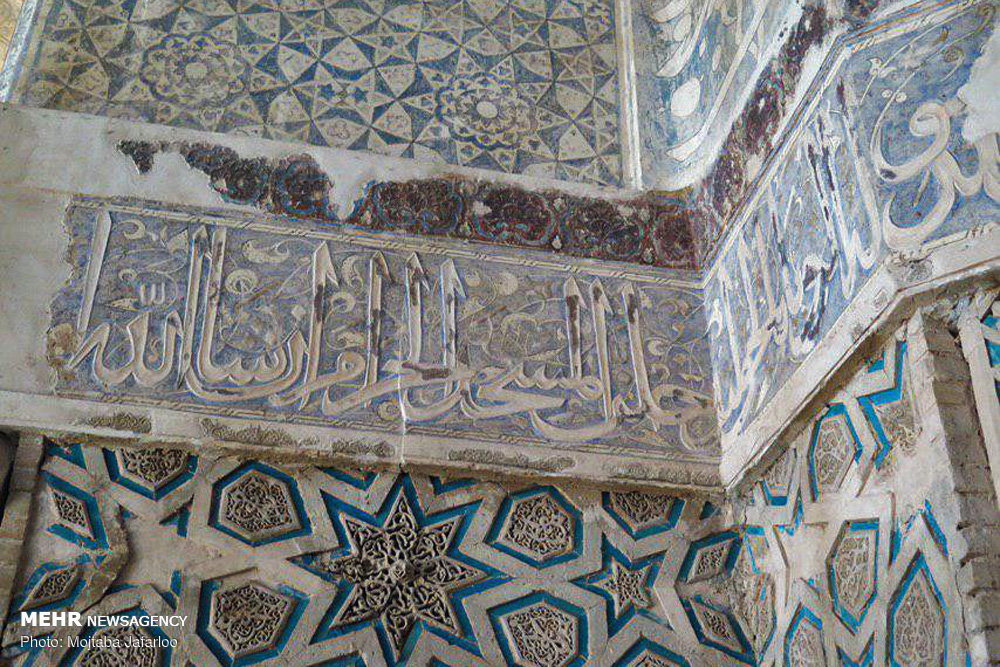 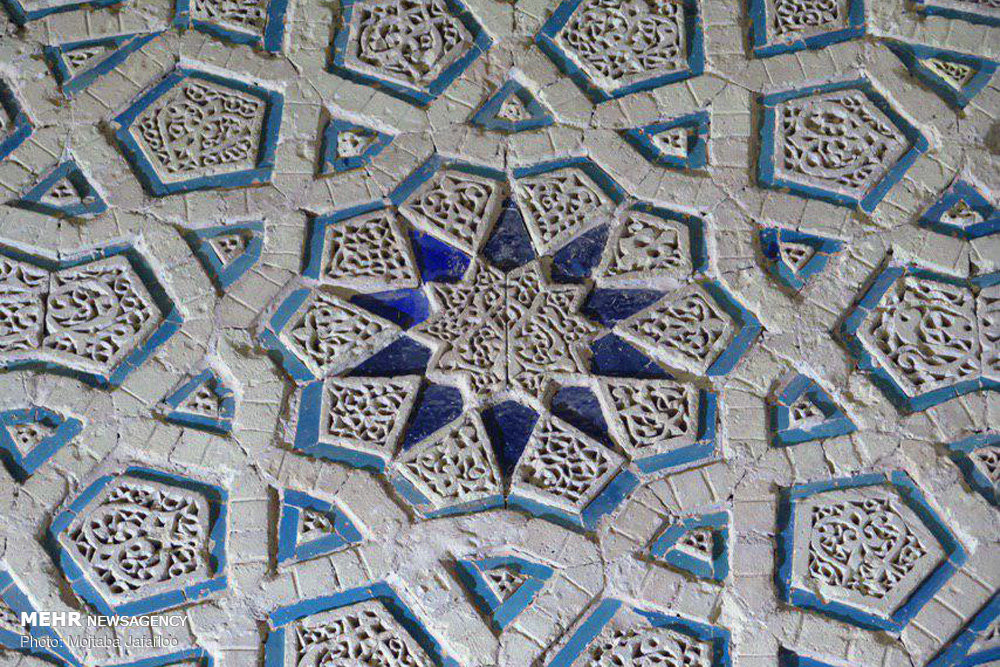 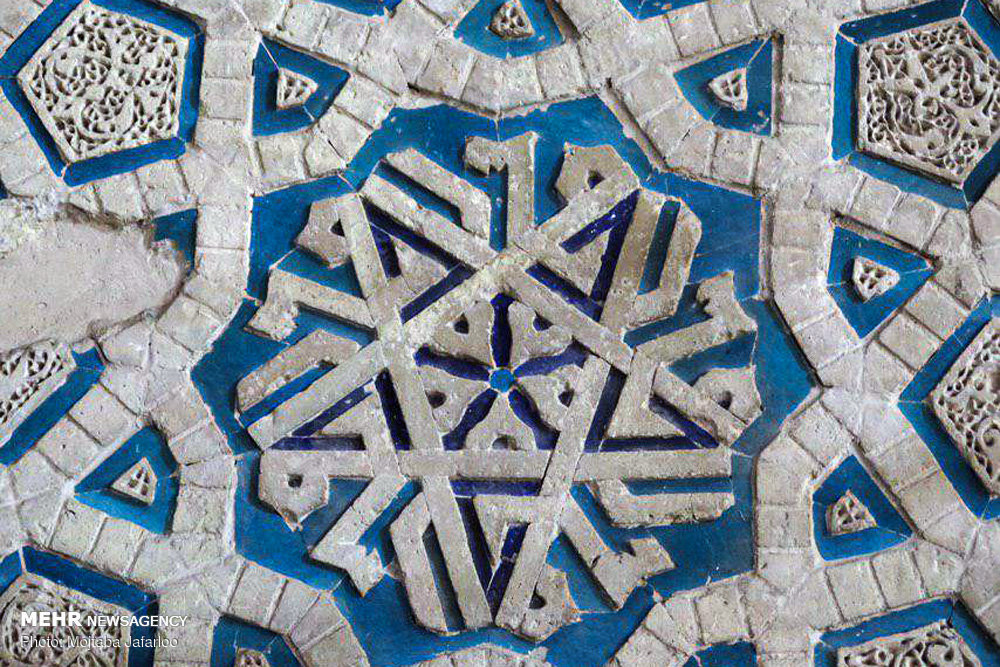 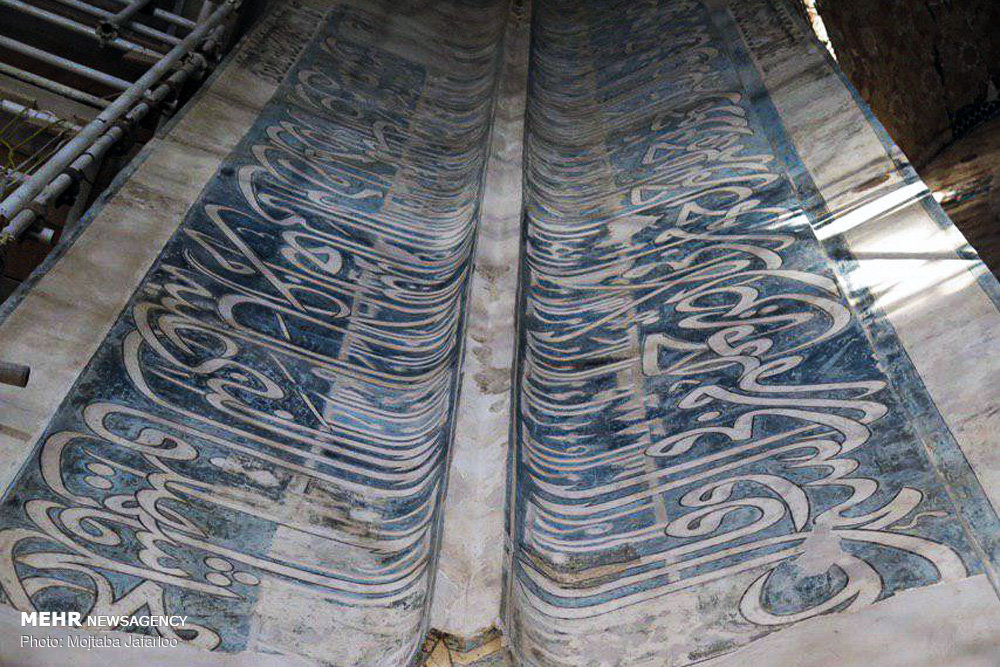 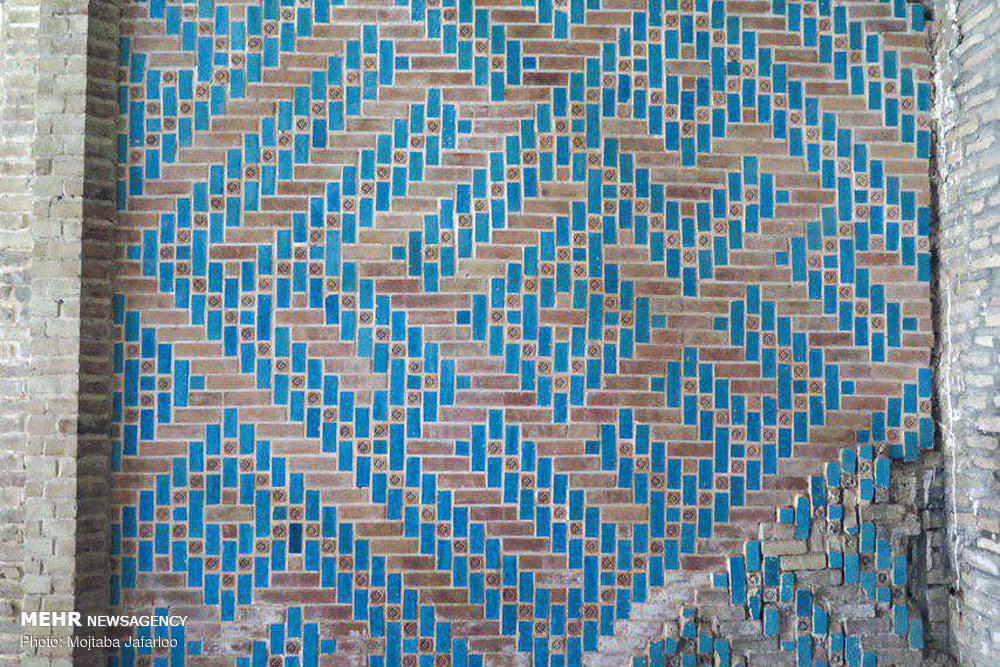 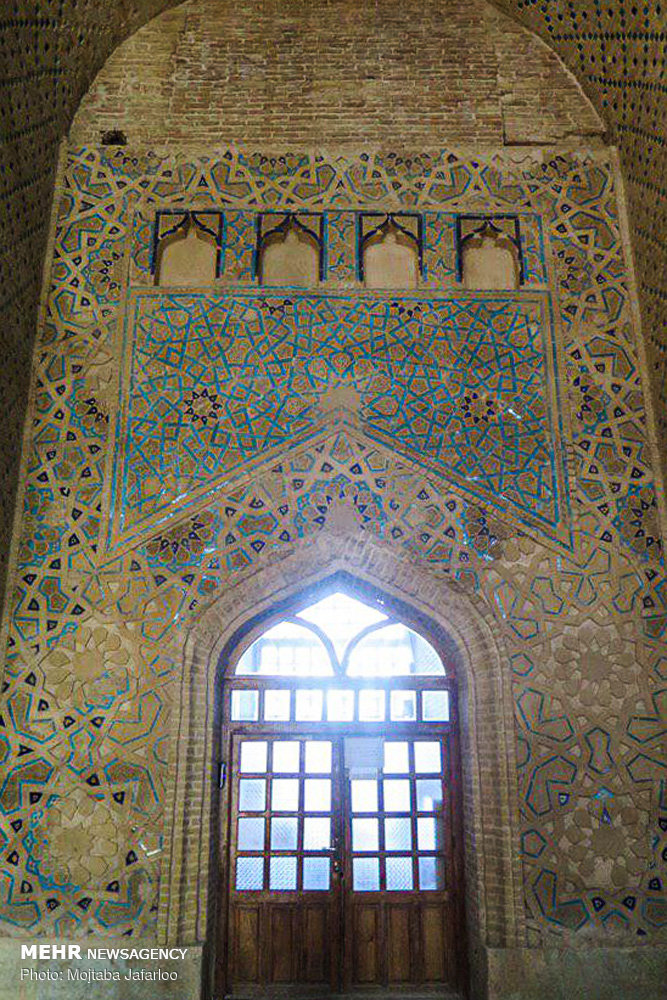 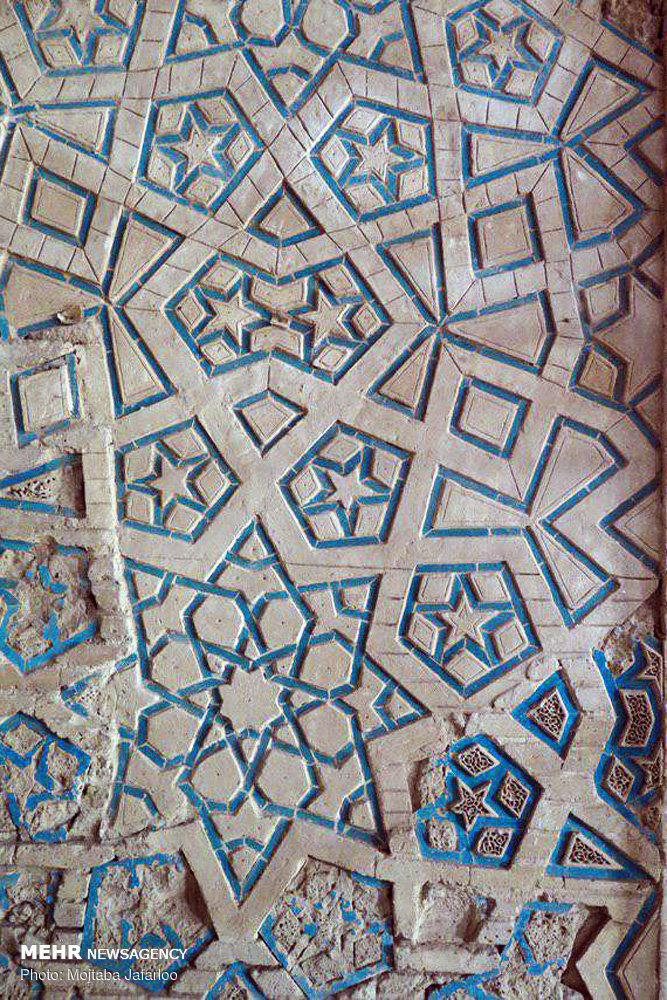 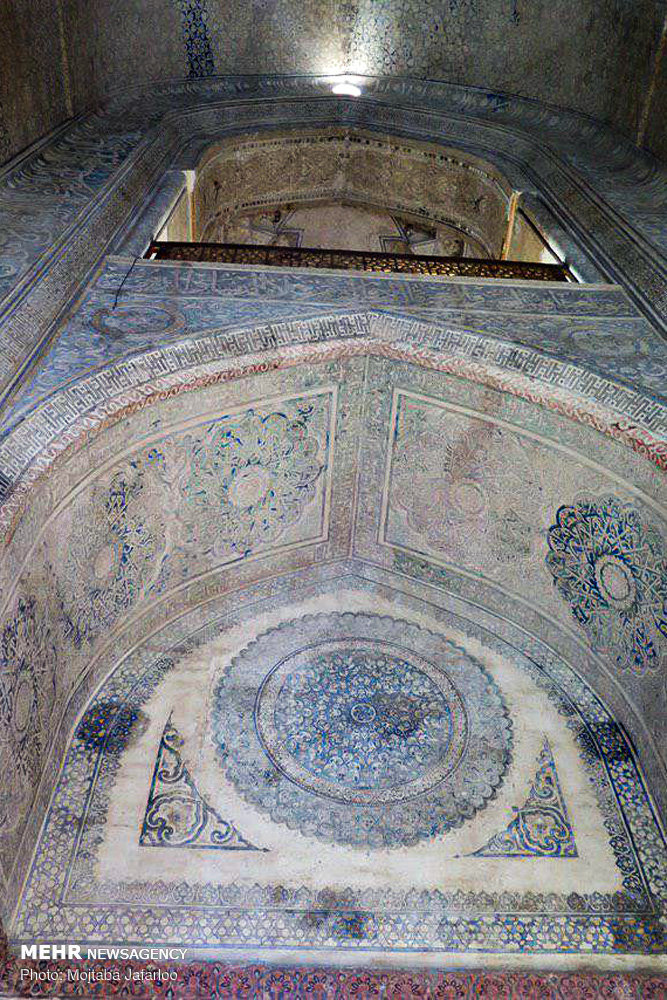 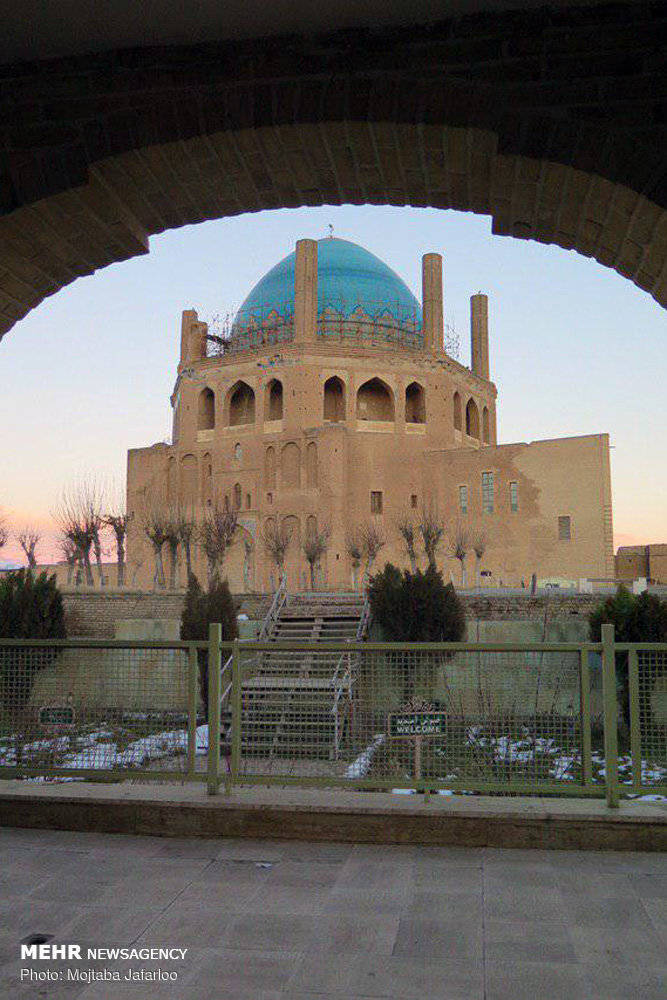 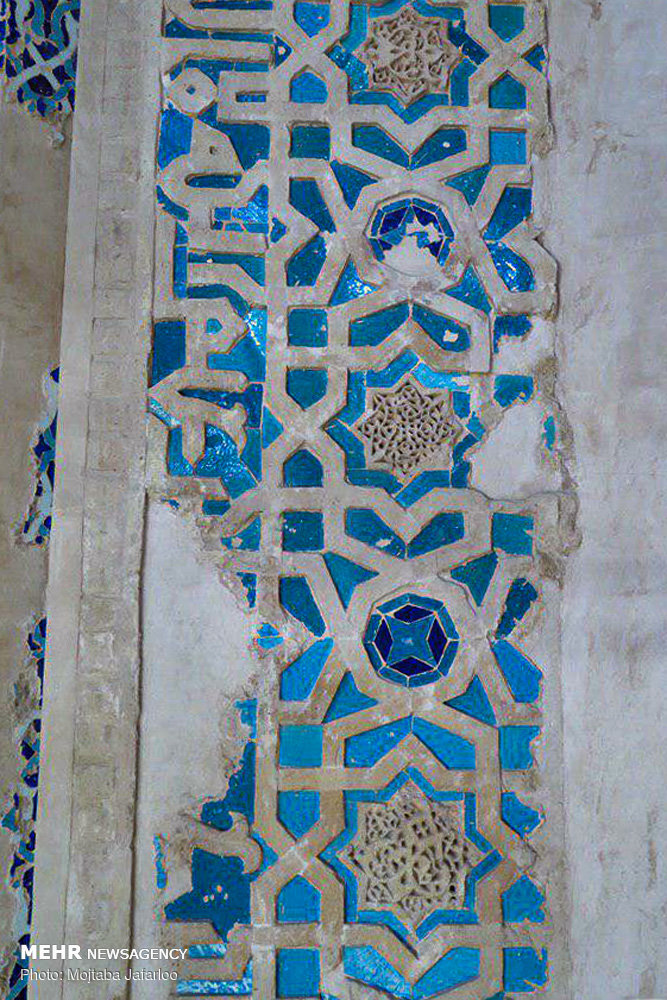 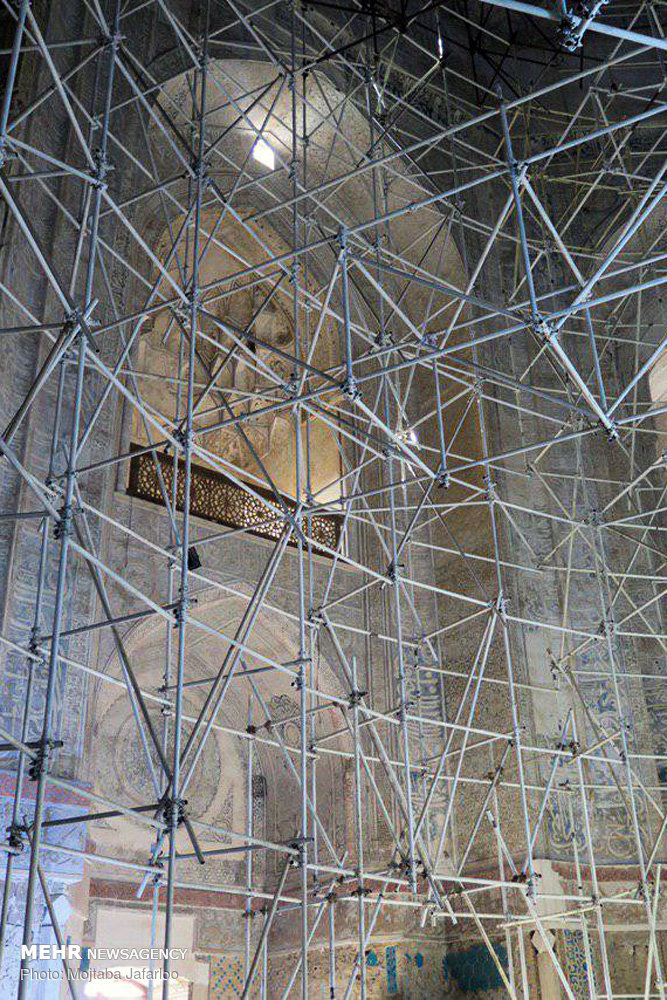 ZANJAN, Aug. 17 2015 (MNA) – The capital city of world’s largest empire, once the largest and oldest mud brick dome, now has revealed quite a city in its heart.

Soltaniyeh was founded by Mohammad Khodabandeh, the adopted Islamic name of lkhan Öljeitü, of Mongolian descent, circa 1302-1312 AD in a track of land with an area of more than 100,000 hectares as the capital city of Ilkhnid Empire. With the city gaining the prestige, it saw the rise of many very unique monuments well recorded in the travelogue and books of sketch of the European travelers, who cited quite a few number of buildings challenging the height and prestige of Soltaniyeh mud brick dome.

Now, with the archeological discovery of distinctive and exquisite tile work, inscriptions, and stone carvings of Dashkasan and other relics, the city bears testimony to masterful craftsmen and artisans of the age as having come together from around the world in the Ilkhanid capital; today, the city hosts and fosters only a fraction of the artistic works, with Soltaniyeh mud brick dome being the most prominent relic of that history.

The mud brick dome has been resilient even after 7 centuries of natural wearing, as a free standing building in the vast geography of Iranian plateau and in the collective mentality of human history.

The building is unique from every angle possible: it was purportedly inspired by the design of Sultan Sanjar mausoleum in Merv, but with an important difference in the architectural plan; the dome in Merv is square, whereas Soltaniyeh is an octagonal structure; in terms of volume, architecture, spatial relations, the proportions of the different components, the stability and strength, aesthetics and decoration, Soltaniyeh provides suis generis example and a turning point in Islamic architecture.

Many of history annals and travelogues record the sheer scope and heights of beauty of the building, and orientalists and archeologists in the west have aptly emphasized on its importance; the main building has made of mud bricks, with an overlay of turquoise and ultramarine clays as decoration. The construction of the building was famously supervised by Khawaja Rashidaddin Fazel Hamedani, and was first intended to function as a mausoleum; the octagonal building with eight minarets and two shells of turquoise as a cupola is the most brilliant example of Ilkhanid architecture.

The building and the homonymous city had been the host of many fine arts craftsmen and artisans; the superb mosaic and fine tile work is the city’s main art products, ‘golden pottery,’ which shine forever.

The story goes that when Sultan Mohammad Khodabandeh adopts Shiism, he patronized the production of golden appliances for use in the court guests and royal entourage. This triggered a large inventory of artisans working as goldsmiths producing fine golden pottery works.

Soltaniyeh dome was registered in UNESCO World Heritage List in 2005. Outside the building, a small museum provides the visitors and tourists from around the world with photos and objects of the dome. The venue is also a frequent site for handicrafts display and cultural and artistic events in different occasions.

Yahya Rahmati, the head of provincial office of Cultural Heritage Organization told Mehr News local correspondent that the geophysical studies through magnetoscopy of the Soltaniyeh dome had raised the odds that there had been a historical city just under the dome; “the first round of the studies used magnetoscopy as an introduction to well-targeted explorations in archeological sites,” he said.

“The studies have only covered small part of the dome, since the whole complex covers staggering 11 hectares of land area; the results would be a good criterion to continue the studies in the dome and the city,” Rahmati added.

“The modern archeological investigations have continued into the dome newly discovered in the northern side of the dome; to the most probability, there would be a full city under the old structures, just as one discovered in Jiroft in southeastern deserts of Kerman,” he speculated. 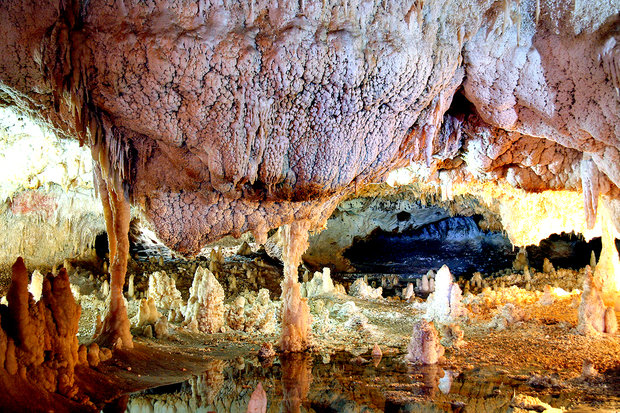 TEHRAN, Jun. 10 2019 (MNA) – Katale Khor cave is one the most breathtaking caves in Iran which is located in Zanjan Province. The Katale Khor cave has been chosen as the first cave in terms of its crystals and cave formation, beauty and its numerous layers.

Iran has many caves, some of which are unique and special. There are many natural wonders in these caves; including magnificent stalactite and many million-year-old fossils. One of these beautiful caves in Zanjan city is katale khor cave. It is 150km south of Zanjan, off the Soltaniyeh–Hamadan road near Garmab.